Finding Fish at the Beach

Surf Fishing
Finding Fish At The Beach
By Bill Varney Jr.
Huge churning swells from strong Pacific storms make it impossible to fish the surf at times during the winter.But these same storms also produce new fishing areas by forcefully creating underwater structure that fish call home.Storm surf along with tidal changes, riptides and inshore holes work together to produce some of the most productive fishing spots. Knowing just where to fish and being able to read the beach will come with time and practice. The first step when you get to the shore is to find an area where you can get a good view of the waterline. Standing on the beach’s berm above the waves is a good place to start.

Survey the water’s edge and look for where the water rushes up the farthest onto the beach. This is a bay. Look for areas in between where a point pushes out. As you look up and down the beach you’ll probably see several of these point and bay areas. Water circulates around these areas and creates fishing opportunities. 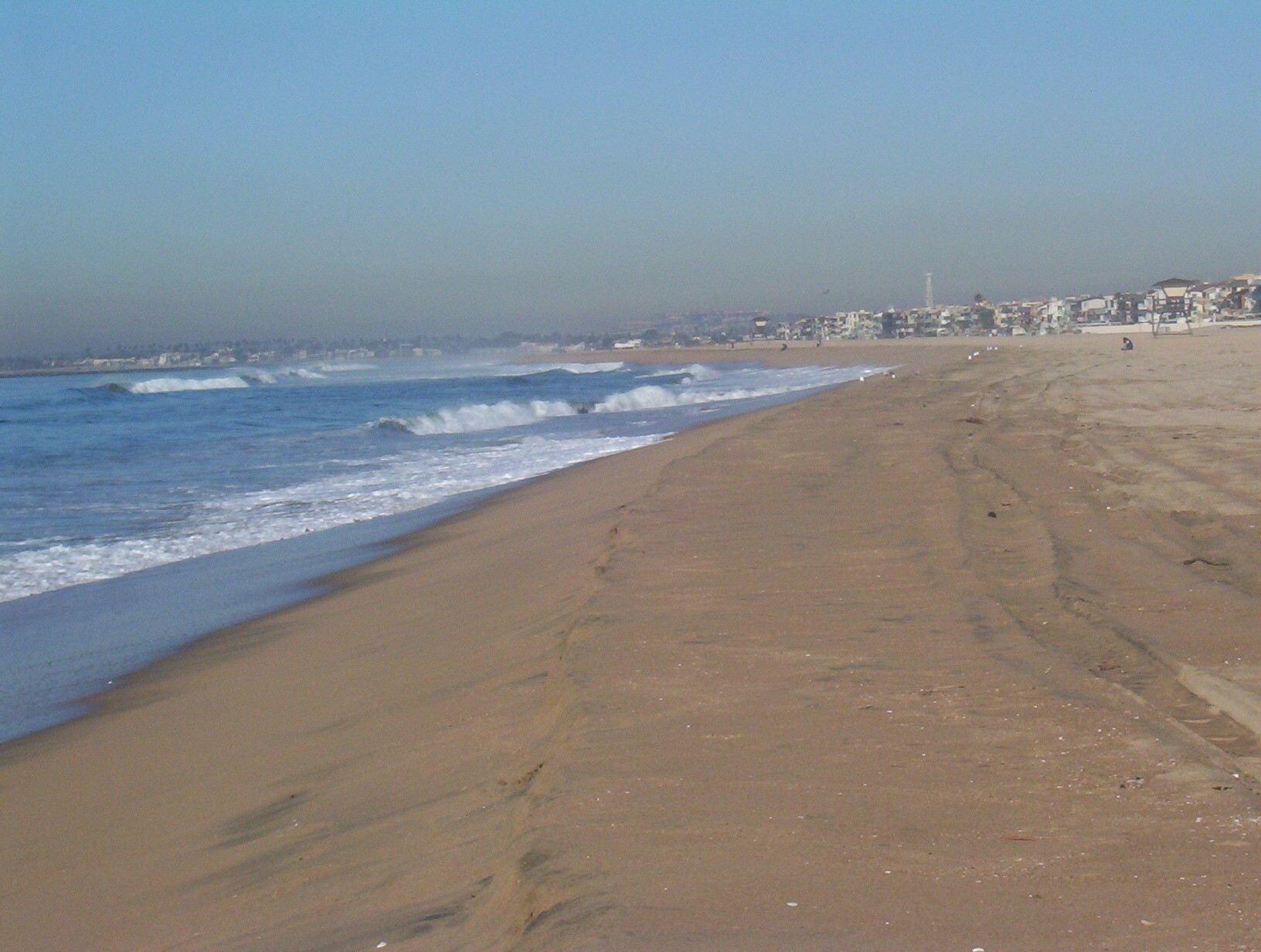 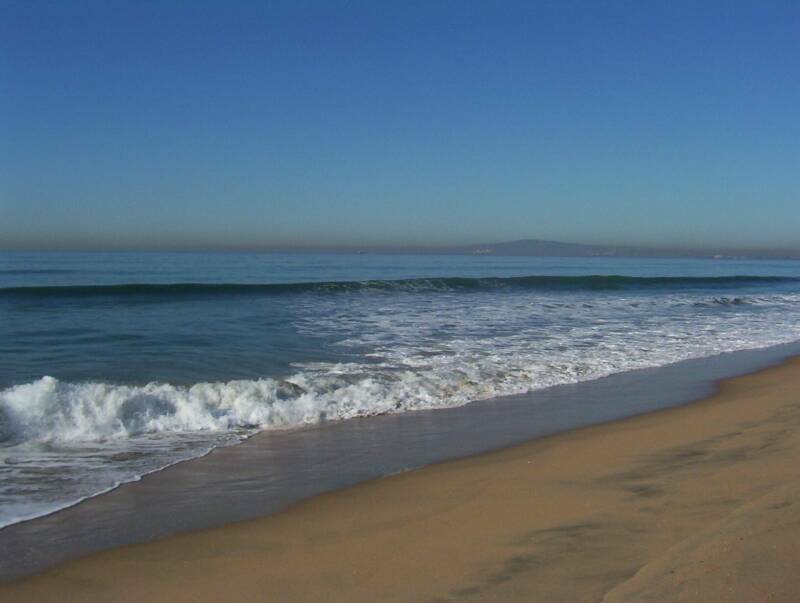 When fishing between the points look just offshore and find the gutter or trough that runs parallel to the beach. If you’re looking straight out to sea, it is twenty to sixty feet in front of you, parallel to the shore. It’s usually six to ten feet wide, three feet deep and twenty to one-hundred feet long. Both an inside and outside trough are created by breaking waves and may be more pronounced after larger surf.

The trough is a favorite place for fish to hide. Corbina use the trough to lay in wait and then rush up the beach to eat sand crabs. Perch stay suspended in the trough and feed on churned-up bait. One of the best times to search for these troughs is at low tide. Be sure to “mark” your spot by using landmarks so you can find it again when fishing at high tide. 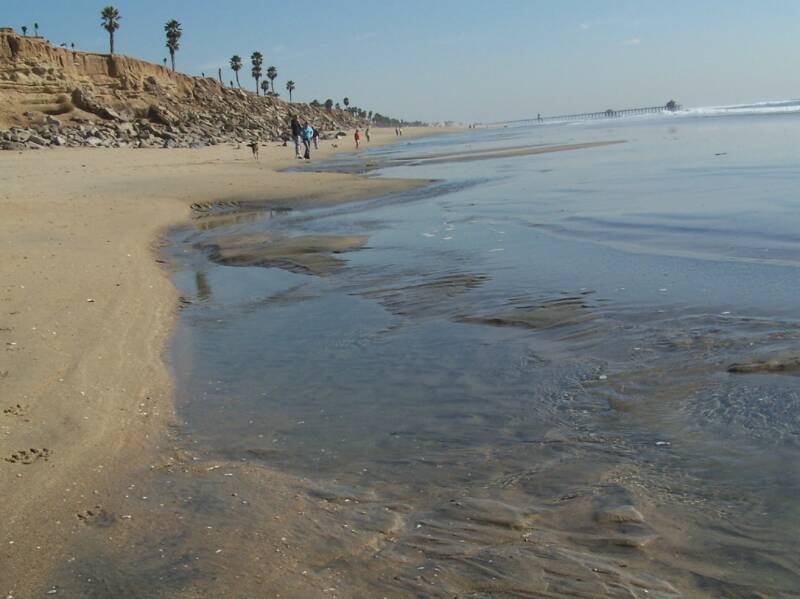 The inshore trough is best place to find fish

Besides troughs formed by waves, strong rip currents also move tons of sand and provide structure for fish. Rid tides are formed by waves which approach the coast nearly head on then reverse themselves and push both water and sand offshore. As these currents carry water offshore they also provide both current and food for inshore fish. 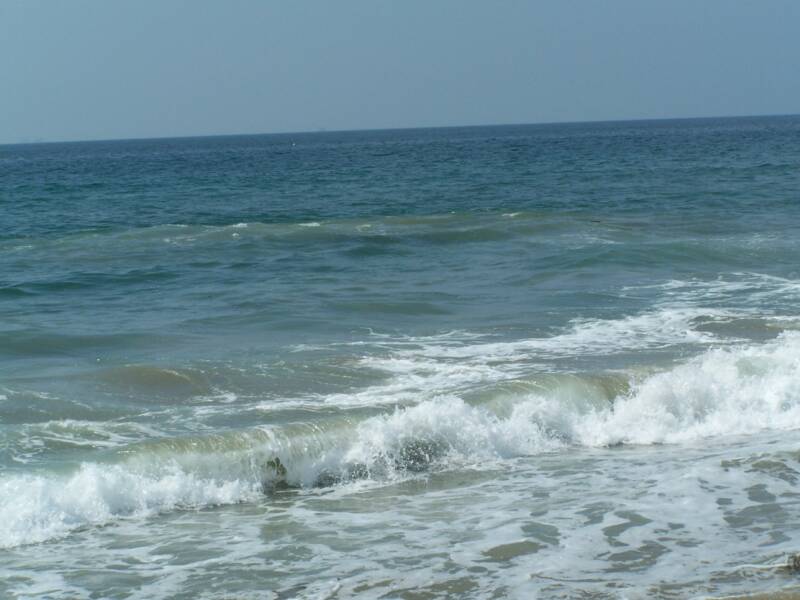 Rip currents appear with off colored swirling water, rippled areas and foam. Some rip tides may be obvious while others are more subtle.

As rip currents pull water offshore they also form a trough perpendicular to the shore where fish wait to find food. Rip currents form in the shape of a mushroom and create neutral pockets on each side. These neutral pockets, formed by an eddy circulation, along with an offshore trough provide some promising areas to fish.

Scan the water for rip currents as they will often form and subside. Some may be subtle and only a few feet from shore. Others will be more pronounced and can extend well beyond the surf line. The best place to fish a rip current is along its sides. Cast out and retrieve you bait slowly across these areas were current meets calm water.

Similar to rip currents, rock jetties also provide eddy circulation which attracts fish. Rock outcroppings produce water movement around its point. This is where currents create a natural feeding habitat due to water movement caused by waves and tidal changes.

As the tide moves up and down throughout the day water currents vary in strength and intensity. At slack tides, very little water will be moving around rock points. At larger tidal changes, more water and thus stronger eddy circulation will occur.

Eddy circulation is important because it provides a current where fish can suspend themselves while water flushes through their gills providing oxygen. The eddy also provides a current for bait and nutrients to pass within the fishes’ strike zone. 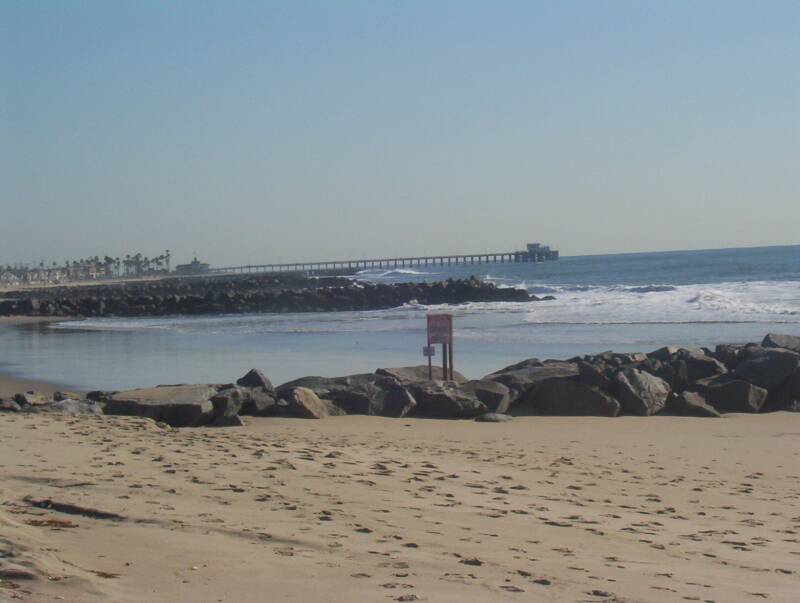 Slack tide conditions and small surf create very little circulation and force fish to search for food. Large surf and strong tidal conditions create too much current and make it difficult for fish to stay in place and feed. Fishing is always best when there is a slow to moderate current condition. Conditions of no current or a very strong one are least productive and make fishing tough.

To find where the current has created a fishing eddy look out toward the jetties’ point and find the leeward or downward side of the current. Look for approaching swells and watch them as they approach the rocks. The opposite side from which they approach is the leeward area where an eddy will form. The eddy has similar characteristics to the rip current: swirling water, rippled areas and foam.

When fishing rock jetties cast along the outside and inside edges of the eddy. The outside edge may be toward open water and the inside up against the rocks. Fish will lurk in these areas waiting to ambush their next meal.

Rock jetties, rip tides, points, bays and the inshore troughs are all good areas to find surf fish. But one of the most important elements of fishing these areas successfully involves their relationship to tides. We’ve all heard that time-of-day is important in fishing but with surf fishing time-of-tide is even more important. Without enough water these areas
don’t have the current or depth needed to hold fish. That’s why, with few exceptions, the best time to fish is two hours before high tide until two hours after a high tide.

Think of it as you would with launching a boat. If the ramp is completely out of the water your boat won’t be able to float off the trailer. If your jetty or trough is out of the water fish will need to walk there to be caught—and we all know that only happens in the movies. Getting to know the subtle differences at your local beach will help you to find more fish and may be the difference between catching fish and watching bathers.

Bill Varney is a fourth generation Californian whose passion for surf fishing is detailed in his book: Surf Fishing, The Light-Line Revolution available at most tackle shops and online @ www.fishthesurf.com.