ROAD TRIP
Evenings at the Beach Surf Fishing Bolsa Chica State Beach
By Bill Varney, Jr.
It’s a warm spring evening and I can feel a surf fish pulling at my line as I look back to see if the boys have started the fire yet. Today we decided to leave work a bit early and head down to the beach for a picnic and some long overdue surf fishing. As the sun begins to set I pull in my last fish and head on back to the campfire to enjoy my family and a plate of warm food.It’s evenings like this that make California’s beaches such an unmistakable treasure. Southern California has got to be one of the only places on earth were you can leave millions of city dwellers behind and head on down to the beach for an evening picnic, surf fishing and a much needed break from the rat race.

Spring, summer and fall evenings are a great time to push the city aside and head on down to the beach. Local recreation areas like Bolsa Chica State Beach offer some of the best surf fishing and picnicking along the California coast. It’s here in the evenings, just after the beachgoers begin to leave, that we find a fire ring and set up camp to do a bit of surf fishing. 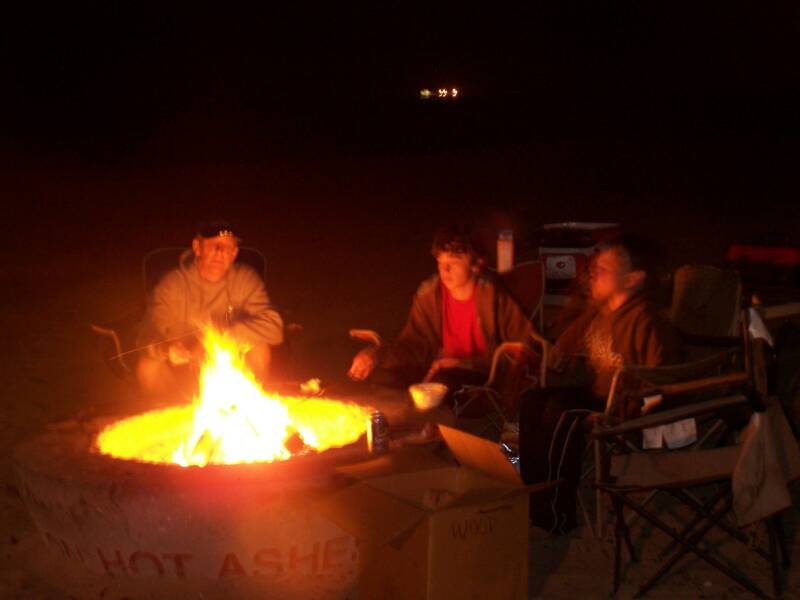 Bolsa Chica State Beach is located between Warner Ave. and Golden West Street along Pacific Coast Highwayin Huntington Beach. With more than five miles of beach and over 200 fire pits it’s a great place to spend time with your family and have a chance at some of the best surf fishing on the coast.

The park opens at 6am and closes at 10pm. It’s facilities include fresh water showers, bathrooms, fire pits, overnight camping for self contained vehicles, park benches and miles of sandy beach great for fishing, surfing and relaxing.

Today we loaded up the car just after work and headed on down. Once we had set up camp around one of the fire pits, we headed down to the water’s edge to catch some bait.

Sand crabs are the preferred meal for surf fish this time of year and Bolsa Chica is loaded with beds of crabs just waiting to be caught. Our first stop is on a berm at the sand’s edge. From here we can look down the beach for signs of sand crabs. Just to our right is a group of sand pipers punching their beaks into the sand in search of crabs. This is a good place to start. 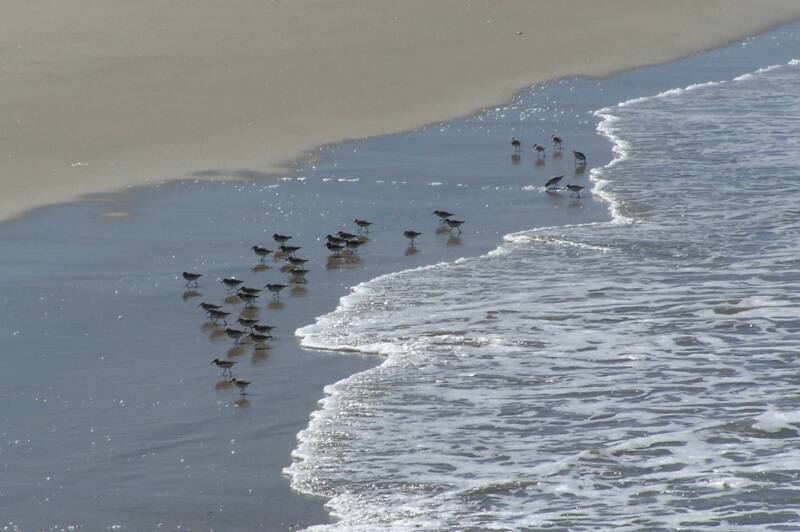 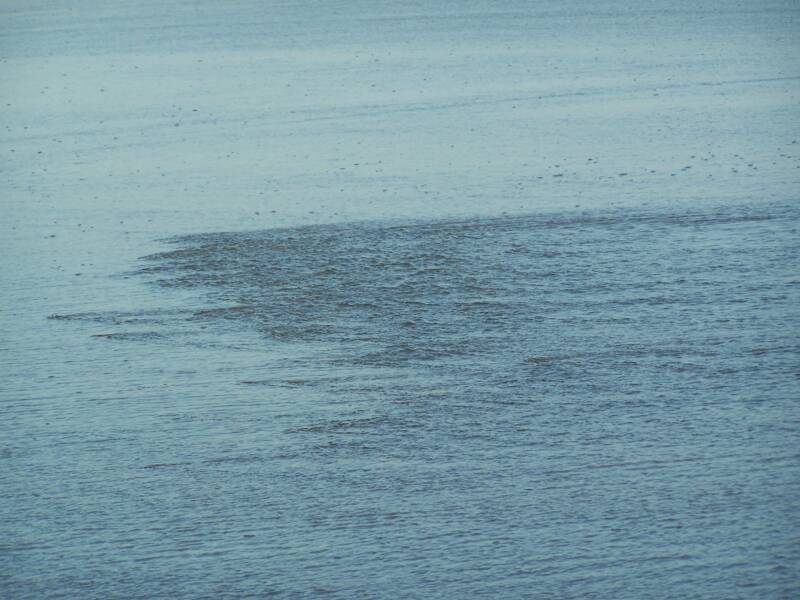 Once we get a bit closer we see a crab bed next to the birds where sand crabs have their feeding antenna fully extended in hopes of catching their evening meal. I prefer to use a sand rake to catch crabs but the kids do just as well using their hands to dig up crabs and place them in the bucket. To keep the crabs fresh we keep them in a plastic bait bucket with a small piece of moist kelp on top.

In no time we have all the crabs we need and it’s time to try some fishing. Long gone are the days of fifteen-foot rods and thirty pound test. Today, we use light gear with rods built more for trout than tuna. My rod is eight feet long and rated four through twelve-pound test. My reel is filled with two hundred yards of four-pound test monofilament. 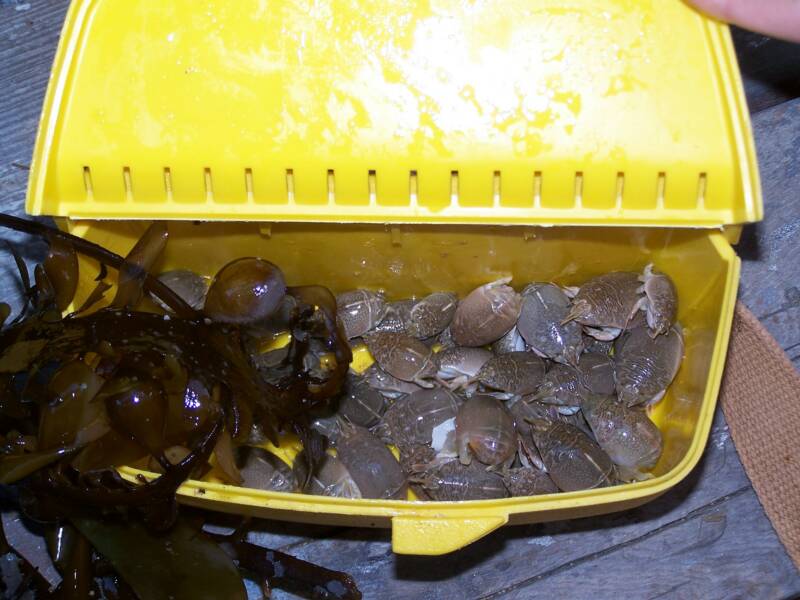 After years of surf fishing we’ve learned that most of the fish are within sixty feet of shore. We’ve also learned that if we downsize our equipment not only will we catch more fish but also we’ll have a lot more fun doing it!

Our rigging comes next. The Carolina Rig is the most commonly used setup for the beach. It’s simple and consists of a sinker, bead, swivel, an eighteen to thirty-six inch leader and a hook.

Because you want to keep in constant contact with the bottom, use a heavier sinker (¾ – 1 oz) and a shorter leader if surf is big. In small surf a longer leader and a lighter (1/4-1/2 oz) slider egg sinker works well.

Baits I like to use in the evening include: sand crabs, mussel, ghost shrimp and lugworms. If you don’t have time to collect your own bait, stop by Big Fish Tackle (562-431-0723) just a few minutes Northwest in Seal Beach (about 3 miles North on Pacific Coast Hwy. At Seal Beach Blvd.) for a great selection of live surf baits. They’ll even show you how to properly hook and fish their baits before you go!

Now that we’ve gathered our bait it’s time to find the fish. I like to find a high spot on the beach and look up and down the coast for signs of fish. The first thing I look for is the formation of small points and bays. This shows me where an offshore trough makes the water deep and a sand bar makes it shallow. 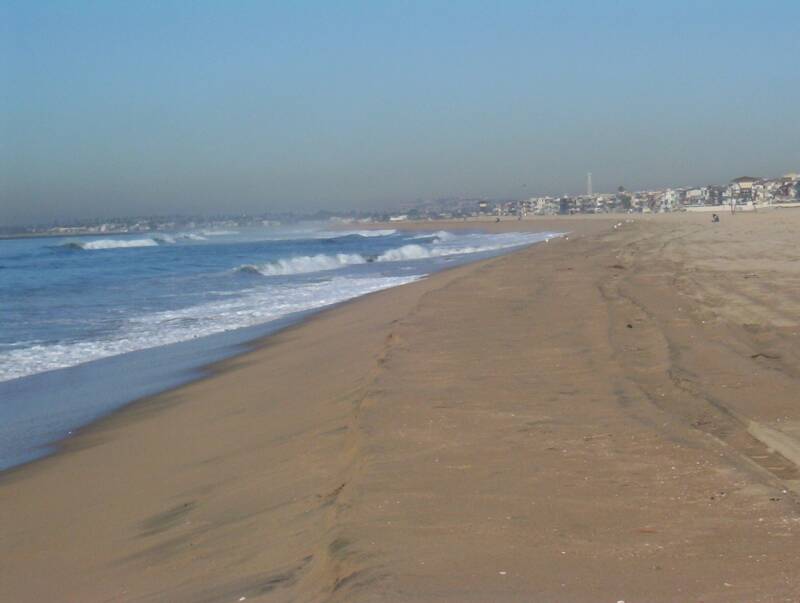 Straight out from the beach two troughs form where waves crash at both high and low tide. The first trough is just offshore—and many times you’ll see swimmers and surfers disappear into it as they walk out into the surf.

The second trough is where the outside waves break before they reshape and come to shore. Fish love to wait in both of these troughs for protection and feeding. It’s easiest to find these troughs at low tide. If it’s high tide when you go, try fan casting (casting to the left, center and right) during high tide to find the fish.

Another place to find surf fish is along the sides of a rip tide. Rip tides form when water that washes ashore as waves is channeled and pushed back offshore. Riptides are characterized by off-color, swirling and bubbling water. Some riptides are as little as fifteen-feet long and may last just a few minutes; others can be hundreds of yards long and extend well outside the surf line. Look for them to form off and on during your stay at the beach and cast along their edges to find fish.

A unique feature of Bolsa Chica State Beach is that it allows anglers to try their luck from both the beach and rock jetties. Two small jetties on the south end of the State Park produce some great fishing for perch, spotfin croaker, halibut and corbina. No matter which end of this five-mile stretch you try you’re bound to find fish.

So when you’re tired of city life and ready to head on down to the cool serenity of the beach consider any one of Southern California’s great State Beaches. They’re a great place to spend some time with your family, enjoy a bonfire picnic and try your luck at catching fish in the surf.